How the gunpowder plotters got caught - and other great quotes from 'Cunk on Britain'...

Have you been watching the new series 'Cunk on Britain' (BBC2, 10pm, Tuesdays)?

I am hooked - mainly because of all the hilarious one-liners.

Here are some of my absolute favourites from the series so far...


On the Cerne Abbas giant:
"It's the second crudest hill in England after Benny."

On the Bayeux Tapestry:
"It's like a Game of Thrones season finale drawn by an eight-year-old boy... just like being there, but in wool."

On castles:
"They were originally built by kings to sit in and protect their land - whereas today they are just extortionate wedding venues."

On Richard III:
"He tried to escape the Battle of Bosworth by burrowing under a car park."

On Roman Baths:
"They were an early type of gentrification - like when someone opens an artisan bakery in Hull."

On Alan Turing:
"This weird man who discovered computers is now a national hero. People queue for ages to touch the Turing Shroud."

On evolution:
"The monkeys that didn't evolve into humans must have been absolutely gutted..."

On Stone Age Man:
"Why did Stone Age people bury all their stuff underground? Were they worried someone might steal it?"

On Stonehenge:
"It was also used to tell the time - and it is the only clock you can see from space - unless you have a clock in your spaceship..."

On the Vikings:
"They probably settled in York to be near the Jorvik Viking Centre."

On Mary, Queen of Scots:
"She was called 'Bloody Mary' because like the drink, she was bloody horrible."

On Sir Walter Raleigh:
"If he was such a great sailor, why do we only remember him for his bikes?"

Posted by Niall Davison, Founding Partner, www.iwritecopy4u.co.uk at 18:18 No comments:


Following on from my recent post of snowy signs during the Beast from the East's visit to the UK, here are my all-time favourite weird and wonderful signs for your amusement.

They are mainly from the UK, but I've added in a few from further afield just for fun...


Posted by Niall Davison, Founding Partner, www.iwritecopy4u.co.uk at 16:11 No comments:

They say that a good ad slogan should be memorable – and stand the test of time.

2.    Which early credit card was known as ‘your flexible friend’?

3.    Which beer claimed to ‘refresh the parts other beers couldn’t reach’?

5.    Which breakfast cereal claimed to ‘keep hunger locked up ‘til lunch’?

7.    Which luxury company told us that ‘a diamond is forever’?

8.    Which global business describes itself as ‘the world’s local bank’?

10. Which soft drink is reputed to be ‘made in Scotland, from girders’?

12. Which business makes this claim of its products – ‘it does what it says on the tin’?

13. Which beer brand is ‘reassuringly expensive’?

14. Which treat came with ‘the taste of paradise’?

15. The man from which company likes to say ‘yes’?

16. Which household cleaner ‘loves the jobs you hate’?

17. Which breakfast cereal issued the challenge – ‘I bet you can’t eat three’?

19. Which treat was said to be ‘full of Eastern promise’?

20. Which global superbrand used to tell us to ‘Think different’?

How many did you get? If you’re struggling with a few of these, click here for the answers. 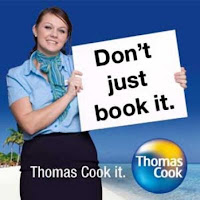 Just to prove you can’t put a good slogan down, take a look at the history of this one from the well-known travel firm.

Originally introduced in 1984 to advertise the firm’s services, it was dropped in 1993 and replaced with a few much less memorable and short-lived slogans, such as ‘The nice surprise is the prices’.

In 2008, 15 years after ‘Don’t just book it. Thomas Cook it’ was dropped, a YouGov survey found that 75% of respondents aged 35-44 could still complete the slogan! And in the 15-24 age group, one in four knew it, even though they would have been well under 10 years of age when it was last used.

Needless to say, the company reintroduced the slogan immediately, and it remained in constant use until 2013, when it was retired (again!) – this time in favour of the more internationally bland ‘Let’s go!’

‘Don’t just book it. Thomas Cook it’ is one of just 125 ad slogans that have made it into the Advertising Slogan Hall of Fame.

Posted by Niall Davison, Founding Partner, www.iwritecopy4u.co.uk at 15:44 No comments: 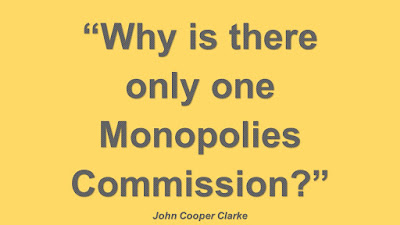 John Cooper Clarke is simply a genius with words.

If you haven't already discovered him, here are a few of my favourite snippets from his work.

"You can count on him - he'll always let you down."

"To convey one's mood in seventeen syllables is very diffic"

"Increasingly, I have to deal with bereavement. I could go to five funerals a week. But that many vol-au-vents isn't good for you."

"My manager says I'm far too sophisticated an artist to play in Burnley. Or anywhere else where they still point at airplanes."

"I fell down the stairs the other night, but the wife just thought it was Eastenders finishing early."

Snippets from some of my favourite John Cooper Clarke poems...

People mention murder, the moment you arrive.
I'd consider killing you if I thought you were alive.
You've got this slippery quality,
It makes me think of phlegm.
And a dual personality
I hate both of them.
(from 'Tw*t')

And finally - a limerick...

Two ugly sisters from Fordham
Took a walk one day out of boredom
On the way back
A sex maniac
Jumped out of a bush and ignored 'em.

Born in Salford, Lancs in 1949, John Cooper Clarke became famous as the 'punk poet' in the punk rock era of the late 1970s. In 2013 he gained an honorary doctorate from Salford University, acknowledging a five decade career spent bringing poetry to non-traditional audiences. His response: "Now I'm a doctor, finally my dream of opening a cosmetic surgery business can become a reality."

Here are details of his forthcoming 2018 gigs.
Posted by Niall Davison, Founding Partner, www.iwritecopy4u.co.uk at 13:29 No comments: 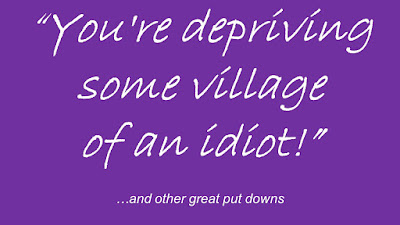 You know that moment when you want to find a way to put someone in their place?

As I get older, that happens to me more and more often.


But it's not always easy to think of something suitably cutting and witty to say.

Well, here are some suggestions - not mine, I hasten to add - but I suspect I won't be able to resist the temptation to use some of these soon!

Can you add any great put downs to this list? Simply post your favourites in the comments below...


Posted by Niall Davison, Founding Partner, www.iwritecopy4u.co.uk at 13:32 No comments:

OK - I know the country is divided between those of us who love puns, and those who can't stand them.

Well - if you hate them, look away now! You have been warned.

And if, like me, you're a pun lover, read on for a chuckle - and maybe the odd groan or two...

“To print out this article about bladder weakness, simply press ‘Control’ ‘P’”

“Have you heard about the investor that made his fortune by selling his shares in spaghetti sauce and investing in biscuits instead? It’s a classic ragus to rich teas story.”

“Don’t buy alphabetti spaghetti in France – it doesn’t taste the same with French letters in it!”

“I’ve been asked to speak at a nudist camp next weekend. I can’t do it because I’ve got something on.”

“Sale now on at the magic shop – buy wand, get wand free!”

“The rules of the superglue club may be very strict, but everyone sticks to them.

“I went to a swingers’ party – it was wife changing!”
Posted by Niall Davison, Founding Partner, www.iwritecopy4u.co.uk at 11:19 No comments:


With the UK in the grips of the 'Beast from the East', check out these funny signs from around the world, showing that laughter is the best way to keep warm...

Posted by Niall Davison, Founding Partner, www.iwritecopy4u.co.uk at 12:52 No comments:

Why not follow this blog? Enter your email here...

A little bit about me...

Niall Davison, Founding Partner, www.iwritecopy4u.co.uk
Peterborough, Cambridgeshire, United Kingdom
Niall has over 20 years in-house copywriting and communications experience in the travel, leisure and financial services industries, working at Thomas Cook and in partnerships with Barclaycard, MBNA, and Travelex. A firm believer in the copywriting principle of “selling the good night’s sleep, not the mattress”, Niall founded iwritecopy4u to make great copywriting and communications services available to small and medium sized companies without the need for big budgets!

Check out the blog archive...